The Great State of Nebraska

A little judgmental? Maybe, but it is me writing this blog after all 🙂 There is more than a little truth to that statement.  When you travel, you need to use your imagination. There are ALWAYS interesting things to see wherever you go.   Lots of people said “Nebraska’s flat and boring with nothing to see but endless fields of corn”

Did you know the largest rail yard in the WORLD is in North Platte, Nebraska?  Did you know there was a German POW camp called Camp Atlanta in Nebraska, which housed 3,000 German POW’s captured in the North African Campaign during WWII? Did you know you can take an amazing journey through prairie life at the Nebraska Prairie Museum?  Did you know there’s a cool arch called “The Great Platte River Archway” that goes right over I-80 and is an amazing museum about the the history of Nebraska? Did you know Buffalo Bill’s ranch, Scout’s Rest is here?  Did you ever visit the historic and very cool Haymarket District in downtown Lincoln?  Or wander around one of the nation’s most amazing capitol buildings or Old Town, Omaha?

How about the fact that Nebraska is the only unicameral state in the country making it unique among U.S. states; no other state has either a unicameral or a nonpartisan legislative body, everyone is a Senator.

Maybe you know all of this, but I sincerely doubt it.  I didn’t know any of it until I visited and saw it for myself proving my statement above. Go explore!

(Scroll over any photo below to view the caption, or click on the image to enlarge it) 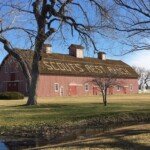 Old Stove in the Museum

I don’t know, but its an awesome picture!

Union Pacific had a tremendous impact on westward expansion